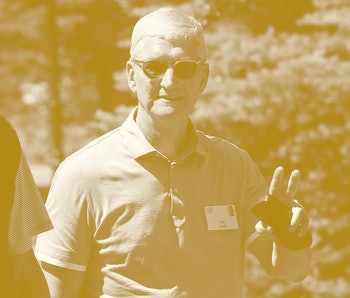 The U.S. Department of Justice is finalizing an an antitrust lawsuit against Apple that could potentially cover many aspects of the tech giant’s hardware and software businesses. Sources familiar with the matter told Politico the DOJ hopes to file the suit by the end of the year, though there’s still a chance it could be dropped altogether.

The chances of Apple being sued for antitrust violations have steadily increasing over the last few years as the Justice Department and watchdog organziations like the FTC have poked and prodded their way through just about every aspect of Apple’s business. These intertwined investigations now encompass everything from the App Store, to AirTags, to Apple Pay.

Now, though, sources say the DOJ is actually putting together pieces of the lawsuit it would serve to Apple. The Big Tech company has faced its fair share of antitrust complaints in the past, but this would by far be its toughest yet.

More than the App Store — Much of the antitrust hullabaloo around Apple has focused on the App Store. It’s an easy target right now; Epic Games’ case against Apple has really thrown the App Store’s strict policies right into the spotlight. (That lawsuit is now under appeal.)

As Epic has shown, the App Store is a great entry point for looking at Apple’s more monopolistic tendencies, but it’s no longer the DOJ’s sole focus, according to Politico’s sources. Hardware is now included in the scope of the DOJ’s potential suit, especially around complaints made by Tile about Apple’s AirTags. Tile says Apple makes it very difficult for third-party developers to access location history in the way AirTags can by default.

DOJ isn’t holding back — The Department of Justice has long taken a lasseiz-faire attitude toward Big Tech’s expanding dominion. We’re finally reaching a point where the federal government has realized it needs to step in.

Google was the first tech company of its size to be hit with an antitrust lawsuit from the DOJ. The DOJ’s case against Google sets its sights on the Search tool and advertisements served through that tool.

As Politico’s sources are careful to note, there’s still a chance the Justice Department won’t actually serve up this lawsuit. With so many watchdogs concerned about Apple’s business practices, that’s looking unlikely.