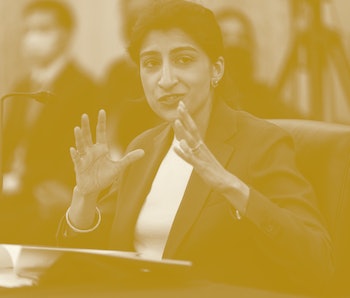 The Federal Trade Commission has been investigating Amazon’s Prime business for a while now, but the scope of that investigation is being broadened to include the company’s recent acquisitions in healthcare and robotics. Reports from The Wall Street Journal and Politico reveal that both of Amazon’s recent buyout propositions — of Roomba parent company iRobot and of medical provider One Medical — are now part of the FTC’s ongoing investigation.

While the FTC has kept quite tight-lipped about this investigation in general, it’s obvious at this point that it’s a sprawling one. The FTC could potentially sue to block either or both of these acquisitions, slowing or halting them. The watchdog agency has been increasingly proactive in its scrutiny of Big Tech acquisitions under the leadership of Lina Khan.

Leaving no crumbs — Amazon’s summer acquisitions have raised eyebrows from plenty of tech watchdogs, but the FTC has said nothing about the propositions just yet. In July, Amazon announced its plan to buy the entirety of One Medical for $3.9 billion. One Medical is a large-scale healthcare operation that operates 125 clinics across the United States and offers virtual appointments for members. That acquisition — which would give Amazon a significant footprint in the healthcare industry writ large — was confirmed as under investigation by a securities filing made last week.

Just a few weeks later, Amazon announced that it would be buying iRobot, maker of the popular Roomba smart vacuum system, for $1.7 billion. A formal probe has not yet been opened by the FTC on this front, but sources familiar with the situation told Politico they’d expect that step to be taken sooner rather than later.

Both buyouts would significantly expand Amazon’s already-massive trove of user data. Both acquisitions could easily be seen as anticompetitive in nature, too, given Amazon’s penchant for buying competitors rather than actually competing with them.

Amazon won’t be happy — FTC chairwoman Lina Khan has always been open about her intentions to regulate Amazon’s sprawling business. As of late, that cause has taken the shape of a deep investigation of Amazon’s Prime business practices. The FTC seeks to understand whether or not Amazon uses deceptive practices in coercing consumers to sign up for Prime, as well as information on how difficult Amazon makes it for Prime customers to cancel their memberships.

Amazon has made plenty of fuss about this investigation, up to and including filing an official complaint accusing the FTC of “harassing” executives like former CEO Jeff Bezos. You can bet Amazon will continue to fight the FTC every step of the way as its investigation continues. You don’t become a trillion-dollar behemoth without being willing to fight dirty.