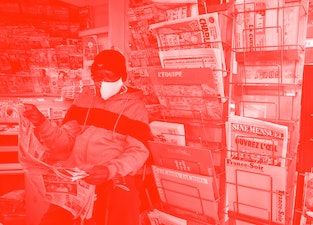 French regulators have imposed a €500 million (about $593 million) fine on Google for not complying with relatively new laws around compensating news publications for their work. The Autorité de Régulation des Communications Électroniques et des Postes (ARCEP) said in a statement that the tech giant had failed to properly negotiate with outlets about payment for featuring their articles.

And that already-high fine could skyrocket if Google isn’t careful. If the company doesn’t pay up and re-open talks with publishers in the next two months, it’ll face additional penalties of up to $1.1 million per day.

The hefty fine comes a little more than a year after regulators first ruled that Google would need to begin compensating publications. At the time, Google agreed outright to comply with the new regulations; that’s ended up being more talk than action, according to ARCEP.

“When the regulator imposes obligations for a company, it must comply scrupulously, in both spirit and letter,” said ARCEP chief Isabelle de Silva. “In this instance, this was unfortunately not the case.”

“We have acted in good faith throughout the entire process,” Google said in a statement. “The fine ignores our efforts to reach an agreement, and the reality of how news works on our platforms.”

Google says it has indeed reached payment agreements with French publishers, including a framework agreement with the Alliance de la Presse d’Information Générale, the official French news media oversight company. It says it’s “about to finalize” a global licensing agreement with the Agence France Presse (AFP) as well.

Should it pay for news, anyway? — The European Union thinks so — as do plenty of other governing powers around the world. Last year, Australia drafted a bill similar to that employed by the EU in 2019. Google went into extreme offense mode in response, claiming baselessly that forcing it to pay for news would harm the user experience of its platforms. Facebook took a similar stance and threatened to pull news from Australian News Feeds entirely if the law passed.

Google ended up introducing a new “Showcase” as a diversion tactic; the company does pay publishers for the content housed in the Showcase, but the rest Google still takes for free. French regulators have seen through this silly little sideshow and are now calling Google out for its bluff, especially with regards to news surfaced through Search’s news functions.

Regulators seem hopeful this fine will provide a much-needed kick-in-the-butt for Google, finally motivating the company to provide fair compensation under EU law. Given Google’s propensity for doing everything it can to not pay up, we wouldn’t be so sure this scare tactic will work in the long run.