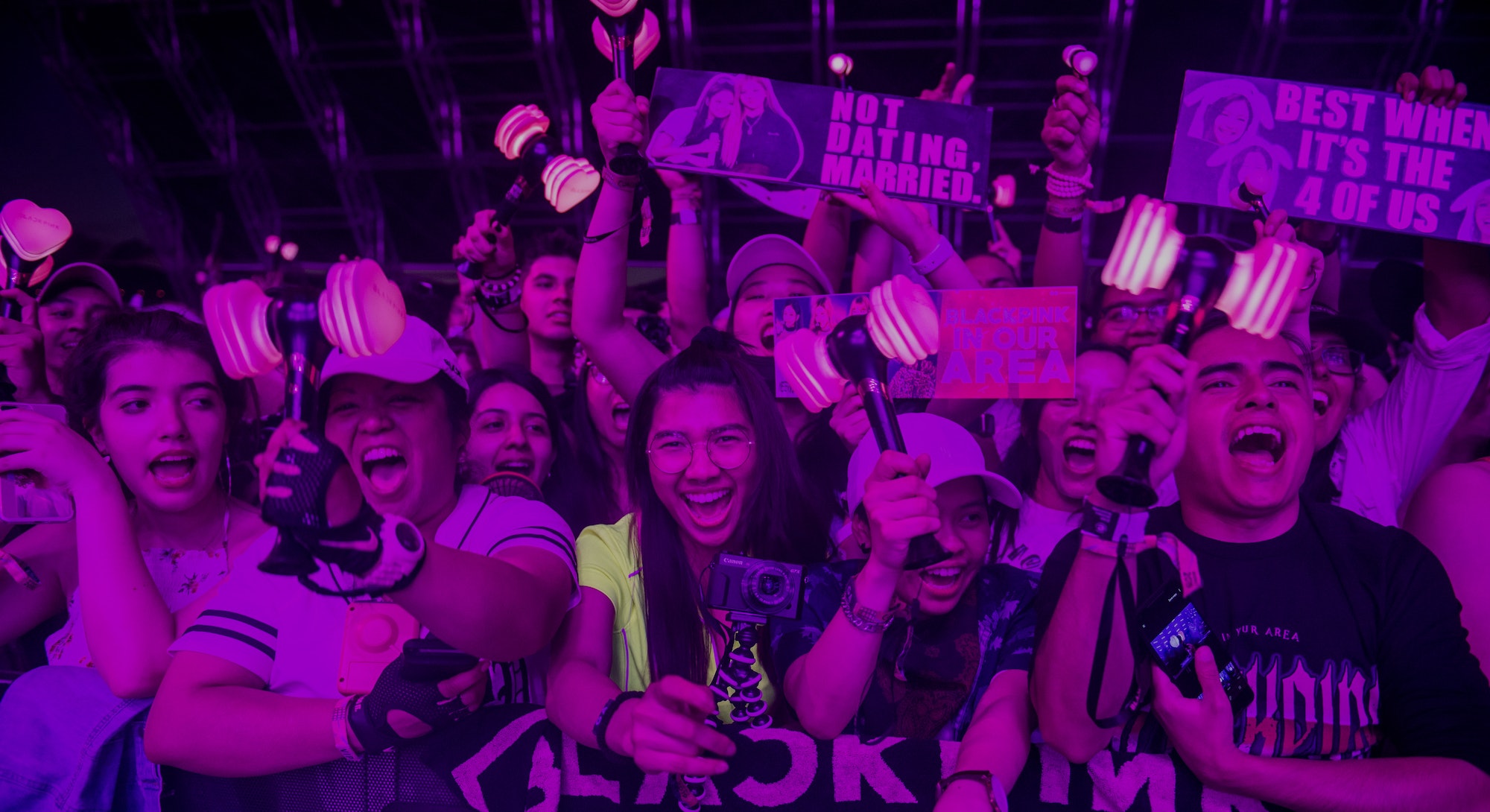 Sofia has been a K-pop enthusiast since she was 14 — when she was introduced to the Korean music genre by her middle school friends — but she always felt different from other fans.

K-pop bands — all-girl or all-boy singing and dancing troupes whose members are known as “idols” — have become a global phenomenon in recent years. Their popularity is reflected in huge online communities — notably the Army, supporters of the chart-topping boy band BTS, and Blink, fans of the girl band Blackpink, which has dominated YouTube in recent years.

But unlike many other young women who enjoy K-pop, Sofia wasn’t drawn to the male idols, as many of her friends were. She was obsessed with the girl groups.

“I felt like I wasn’t like the other girls because I didn’t care about the boy groups,” says Sofia, now a 21-year-old history student from Ontario, Canada. (Like all the interviewees in this article, Sofia asked Input to use an alias for privacy reasons.) “You could put the most attractive guy in front of me, and I just never cared. Looking back on it, I understand now why I was like that.”

At the time, Sofia was struggling with her sexuality. She was fixated on the idea of getting married and having children, and as she saw it at the time, being a lesbian didn’t fit into that picture. She only became comfortable with her sexual orientation in the last few years, around the same time she got serious about K-pop again.

Sofia joined the fandom of Stray Kids, a boy band with an LGBT-friendly following. But she didn’t anticipate how difficult it would be to be openly gay in the K-pop world until she started interacting with people from other fan groups.

“Because I have my sexuality in my profile, sometimes you just get people who call you a dyke in broken English — slurs like that,” she says. “I’ve always struggled a lot with feeling like I’m very gross for having romantic feelings towards women — and I feel like those feelings sometimes get exacerbated when I’m in these spaces.”

Sofia is one of many LGBT fans with concerns about homophobia in the online K-pop community. Queer fans have grown tired of feeling sexualized, bullied, and dismissed by the wider K-pop world. They say that anti-gay sentiments have an impact on their self-esteem, as well as their ability to enjoy the fandoms they’re so passionate about, and hope that by speaking out they may be able to spark change.

Debates about homophobia in the K-pop world have been raging since May, after a physical attack on the idol Holland, one of the few openly gay artists in the genre. Via social media, Holland revealed that a stranger had assaulted him in Seoul and called him “a dirty gay.”

Some fans have pointed out that the K-pop industry profits by “queerbaiting” — drawing in LGBT fans by teasing that idols are gay — while still discriminating against LGBT idols. In addition, online LGBT fans are expressing frustration with how gay relationships are framed in K-pop discourse.

“I’ve seen a lot of casual homophobia in K-pop spaces. They tell people not to assume anyone’s sexuality, which equates to ‘Don’t assume they’re gay,’” says Cherry, a 17-year-old K-pop fan from South Asia who identifies as LGBTQ but says she is “not out yet IRL.”

K-pop fans often scold their LGBT peers for “reading into” certain acts, like when Hoshi of boy band Seventeen recently was photographed wearing a “THEY/THEM” shirt.

Many insist that K-pop is not a gay genre. “In the same breath, they will also say things like, ‘I just know this male idol has a cute girlfriend,’” Cherry says, “or ‘I hope this male idol gets a girlfriend to get rid of the delulus.’” (K-pop slang for “delusional people.”) “As if that’s not assuming their sexuality?”

Some fans simply oppose same-sex relationships alltogether. (A faction of the BTS Army fandom has been using the hashtag #freeJonkook on Twitter for months to protest an official webcomic in which a character based on the band’s youngest member appears to be gay.)

But others have more contradictory views. Fans who “ship” — promote the idea of relationships — between same-sex idols by writing LGBT fan fiction are often the same ones who insist that K-pop stars aren’t gay. “I do write aus” — a term for alternate universe fanfic — “but those are [fiction], this is real life,” tweeted one author, who was called out for an allegedly homophobic comment. Others have tweeted out phrases like “STOP THE GAY AGENDA” while in the same breath supporting LGBT fanfic.

The hypocrisy has not gone unnoticed by LGBT K-pop fans, who feel disheartened and upset by such pervasive attitudes. “They’re pretending like the members are dating, or they’re even like writing fan fiction about it, but then they frame it as if actual gay people or lesbians are kind of gross,” says Sofia. “So it’s okay for it to be a little cute thing or entertainment, but it shouldn’t be taken seriously, because it’s really an immoral relationship.”

Galaxy, a lesbian fan from East Asia in her early twenties, also feels excluded from K-pop spaces because of these attitudes. “When hetero fans start labeling everything as gay or lesbian, it just seems fetishy more than actual appreciation or acceptance for LGBTQ people,” she explains. “It actually sort of shuts us out from feeling like spaces accept us for more than just shipp-y needs.”

The wider K-Pop fandom’s propensity for bold and often vicious online behavior — fueled by the relative anonymity the internet offers — has earned it the crown of the internet’s most toxic community. Many use anti-gay slurs, which Galaxy thinks “stems from a lack of understanding and exposure to the LGBTQ community.”

Such ignorance has been a longstanding issue in the K-pop world, which reflects a wider trend. (CNN has reported that homophobia is “rife” in Korea, which has no comprehensive laws to protect LGBT people from discrimination.) In addition, many countries with sizable K-pop fan populations, like Indonesia or Brazil, also have large religious populations opposed to homosexuality.

Sofia, meanwhile, thinks that homophobic insults stem from the heightened emotions of fans, who can sometimes be obsessive about the idols they support. “A lot of people have this mentality of ‘You’re insulting my idol!’ Anything goes in that situation, because they have such a deep attachment to this person,” she explains.

These tactics have been employed by GGs, fans of the Korean girl band Girls’ Generation, who have tweeted things like, “she’s a lesbian that’s why she’s annoying and stupid” or “im normal! im not a lesbian.”

And that’s not the only way anti-gay sentiments are weaponized in online arguments. “Some fans definitely use LGBT terms and slurs as insults just ’cause they don't like some fandoms or idols,” says Cherry. This approach is sometimes used by members of the Blink fandom, who try to upset BTS fans by repeatedly referring to the band’s members as “phaggots” and joking about the band’s members being raped.

Blackpink’s fans also have aimed homophobic abuse at K-pop outsiders. Blink members made international headlines when they hurled slurs at an openly gay celebrity, Canadian presenter Alex Illest, for calling them “toxic.” BTS fans have engaged in similar behavior. When Lady Gaga beat out BTS for a Best Pop Duo/Group Grammy last year for “Rain on Me,” a duet with Ariana Grande, some of the band’s fans tweeted insults like “this is why I’m homophobic” or “next time I see a white gay in public I’m going to hate crime him” in response.

For queer K-pop stans, these kinds of outbursts are embarrassing, but unsurprising. “Anything can be used as an insult in fan wars,” says Sofia. “If someone is a sexual or gender-based minority, they can expect to receive insults about that.”

Cherry sees it as evidence that LGBT fans aren’t truly welcome in the K-pop world. “To be honest, if you genuinely care about the LGBT community, you wouldn't use these terms as insults,” she says, “because you don’t see them as insults.”

Sofia says that anti-gay incidents ignite her own internalized issues with her sexuality. “I want to cut those people some slack, but it’s invalidating,” she says. “There’s always been that feeling for me that if I ever want to truly be happy, I’m never going to be accepted by my church — and that’s a sad thing to realize and deal with.”

“We’re dealing with a homophobic planet every single day. The best thing that you can do is just be accepting of other voices.”

Still, Sofia stresses that while anti-gay hate is a problem, it isn’t a defining issue for the K-pop world — and she isn’t trying to condemn the entire community. “I don’t want this to sound like I’m painting the whole fanbase as homophobic somehow — I don’t think that’s correct at all,” she says. (Many LGBT-friendly fans label their Twitter accounts with the phrase “homophobes dni” — meaning “do not interact” — to ward off fellow K-pop stans with anti-gay views.)

“I just think that if there’s things that are making LGBT people uncomfortable — even if you don't agree with it — at the very least allow them to discuss their feelings with the greater community.” She hopes that speaking out will make people think twice before they lower themselves to using anti-gay slurs in the name of defending an idol.

“We’re dealing with a homophobic planet every single day,” Sofia adds. “The best thing that you can do is just be accepting of other voices.”