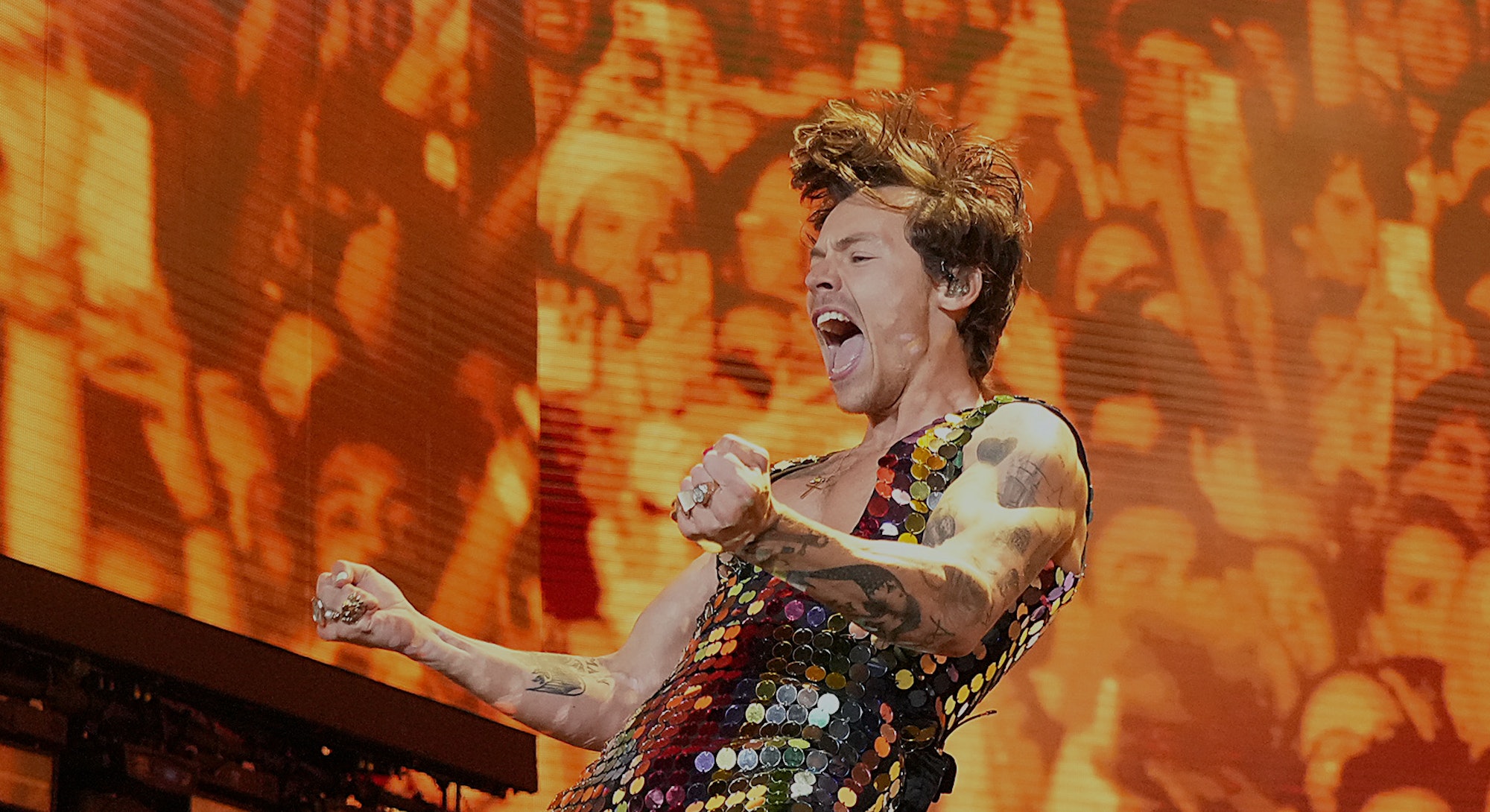 Ayşe Gümüş, a 17-year-old from Turkey, has spent the past few months pouring over clues about Harry’s House, the forthcoming album by pop star Harry Styles.

Styles has been drumming up interest in the already highly anticipated album, out May 20, through a website, YouAreHome.co. Every day, the site reveals a single photographic clue, made partially visible through an ajar virtual door.

Like other members of the fandom she’s a part of, Gümüş is convinced these breadcrumbs lead to one thing: the revelation that Styles and his One Direction bandmate, Louis Tomlinson, have been in a clandestine relationship for the last decade. “A rumor would go away after 10 years,” she says. “If they really wanted to shut it down, they wouldn't keep leaving clues.”

Gümüş has been posting many of her theories about Styles’ album to her TikTok account, @obviouslyally, which has nearly 112,000 followers. One such theory: “In the music video for ‘As It Was,’ which will be on Harry’s House, there was a theme of Harry being kept away from his significant other, who was wearing blue,” she says. “The entire One Direction fandom associates that with Louis, because that’s the color of his eyes and his microphone. It’s a big indicator to me.”

Gümüş’ detective work is highly regarded in the world of Larry Stylinson (a portmanteau of the two stars’ names). It’s a conspiracy-theory-based corner of the internet, mostly populated by women in their late teens and early twenties, united in their belief that Styles and Tomlinson are secretly in love. Fans on TikTok, who call themselves Larries, present evidence about why Styles’ girlfriends are supposedly “beards.” The #larrystylinson hashtag has amassed a whopping 7.5 billion views.

Larries say they are motivated by their adoration of Styles and Tomlinson — and by their disdain for the industry that has allegedly kept them apart. “We watched these boys fall in love in front of our eyes, and suffer the aftermath of being flamboyantly open and proud in a same-sex relationship in the music industry,” says Allyson Pettey, a 22-year-old Stylinson TikToker who currently lives in California.

“Most of us grasp that they’ve had ups and downs and a breakup at some point throughout the last 10 years,” continues Pettey, whose @apiscesthatiscrying account has more than 17,000 followers. “But Harry and Louis, due to being controlled and puppeteered at such a young age, have both used their music as an outlet to speak freely” about their relationship.

According to diehard members of the fandom, the recurring theme of Styles’ and Tomlinson’s supposed relationship has been the notion of “home.” “There’s always been this concept surrounding home. They felt safe with each other, and they would always refer to each other as ‘home,’” says Cassie a 21-year-old aspiring photographer from Queensland, Australia who has more than 26,000 followers on her @cryingoverfineline account.

The fact that Styles named his album Harry’s House has convinced Larries that the conspiracy theory is true — and that Styles is trying to pay tribute to the relationship through his music.

For Larries, the clues are everywhere. “There are ads in newspapers and coordinates leading to a lot of major cities the boys have spent time in together, and a cryptic Twitter account that tweets out lyrics from the album and other symbolic phrases,” says Pettey.

In her mind, the biggest clue so far was this tweet:

“Coincidentally — or not at all in coincidence — that’s the title of a song Louis registered to release two weeks prior. The album title Harry’s House was [revealed] soon after.”

Cassie claims that links between Styles and Tomlinson are a recurring theme when it comes to Harry’s House. “There are track titles related to tweets between Harry and Louis, back when they were really, really young, that fans have been digging up,” she says. “And the photos behind the doors [on Styles’ website] are always linked back to Louis.

“One thing we’ve discovered recently is that Louis’ tour graphic, which is a door, aligns perfectly with the doors on the Harry’s House website,” she continues. “The doors are exactly the same, a perfect geographic fit. We don’t think that’s a coincidence.”

Fans believe that One Direction’s management have conspired to keep the pair apart, forcing them to date fake girlfriends — which has given them their mantra of “not a safe space for Simon Cowell,” a reference to the fandom’s collective distaste for anyone they perceive to have blocked Styles and Tomlinson’s love affair. (Cowell created One Direction, which went on indefinite hiatus in January 2016.)

This can all lead to some extremely out-there speculation — like the conspiracy theory that Tomlinson’s baby was a fake. It’s also resulted in the online bullying of Styles’ and Tomlinson’s respective girlfriends. Recently, Larries have circulated and mocked unflattering pictures of Styles’ current girlfriend, Olivia Wilde, and have called for fellow fans to jump on the “Olivia Wilde hate train.” Many claim this vitriol is due to Wilde’s problematic past actions rather than the fact she is dating Styles.

“It certainly may have been disrespectful at times,” says Stylinson TikToker Maggie, a 21-year-old videography student from Italy whose @skidmalarry account has nearly 36,000 followers. “It has to be admitted.”

Outside observers of the fandom can’t help but agree with her. “The Larry theory is detrimental to the LBGTQ+ community,” says Anthony Recenello, a 37-year-old from California who has worked as a dating and social skills coach for the last 15 years. “What if Harry and Louis claimed to truly be in a romantic relationship with each other and the fans kept telling them that they’re in fact straight and faking the relationship? That would be obviously a toxic thing to do. Because anyone telling anyone what they believe their sexuality to be is wrong.”

In 2020, Recenello analyzed Styles and Tomlinson’s interactions in a YouTube video and concluded that they were just friends, an argument that most Larries responded to with disdain. “If anyone who loves the Larry friendship explains why it’s not romantic, Larries tell us that we are paid by their management company or even Simon Cowell,” he adds. “They’ve set it up so they have an explanation for anything that seems to disprove their beliefs. Like most conspiracy theories, it’s designed to give no room for doubt.”

Although Tomlinson himself has said that the Larry fandom has damaged his friendship with Styles, members like Pettey believe their critics have it all wrong. “Straight is a sexuality too, yet no one is inconvenienced when the public views the boys from a heteronormative frame,” she points out. “This is true pride being exhibited from queer artists, and I know they are appreciative of the environment that fans have created.”

“One of the main reasons why I became a Larry was because Harry and Louis looked at each other the way I looked at my best friend.”

Cassie admits that the Larries’ obsession must look “weird to those outside the community.” But she thinks it transcends the supposed relationship between two pop stars. “Regardless of whether it's real or not, I think having that kind of representation in a band like One Direction is the biggest thing,” says Cassie, who is queer and says that many members of the Larry fandom fall under the LGBTQ+ umbrella. “I think the queer community has latched onto that because it brings them comfort. It’s inspiring for people.”

The theme of representation is one that resonates with Gümüş, too. “One of the main reasons why I became a Larry was because Harry and Louis looked at each other the way I looked at my best friend,” says Gümüş, who has since come out as bisexual. “We pick up on the clues that they leave us because we also do that in real life. A lot of people not only see them as representation, but also see their own story” in Larry Stylinson.

As the official release of Harry’s House nears, Gümüş is feeling optimistic about Styles and Tomlinson’s alleged relationship. “We are closer to them being free and getting to express themselves in whatever shape and form they want, because the times are so much better now,” she says. “I think good days are gonna come with the release of this album.”