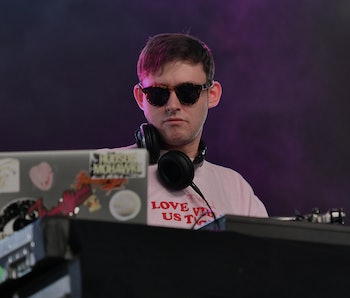 In 2011, a host of electronic subgenres, namely dubstep and what would eventually be coined “trap,” dominated college campuses, and with them, a mutation of rave culture took place. Highlighter colors, binge drinking, and tank tops with slogans like “party with sluts” became inescapable.

One song that ran counter to this shift — raves in the 90s throughout the early aughts were all about intentional escape, rather than laser-guided, self-destructive hedonism — was none other than Hudson Mohawke’s “Cbat.”

Now, a little over a decade later, this wonky earworm is re-entering the public consciousness thanks to a Redditor’s admission on a popular subreddit known as TIFU or “Today I Fucked Up.” The user in question, u/TylerLife, quickly went viral after divulging that a sex playlist he used, which included “Cbat,” was a point of contention in his relationship due to his girlfriend’s distaste for the song.

“I don’t understand why it has taken her two years to tell me she hates that song, it’s a good love making song with good rhythm ... I pretty much played this tune every single time so the amount of times she must have not been enjoying it, when I thought the complete opposite is annoying but also embarrassing in ways.”

The tip of the iceberg — While the decision to get intimate with one’s partner to the dissonance of “Cbat” is a bit of a head-scratcher, the realization that his girlfriend disliked the track was only the beginning for TylerLife. His final words in the post need to be etched somewhere in history: “I usually bust to this song and find it devastating she hates [it].”

“Cbat” was soon incorporated into a number of TikToks, quickly setting off a trend that poked fun at the absurdity of the situation. At the time of this writing, nearly 100,000 videos have been made using the tune. Hudson Mohawke himself acknowledged the resurgence of “Cbat,” and, speaking to NBC, noted that while he personally would not have included it on a sex playlist, there was no judgment on his end.

Up and up and up — Since its explosion on TikTok, “Cbat” has entered Spotify’s viral charts, landing at the number one spot on the “Viral 50 - Global” playlist. For what it’s worth, the company’s viral charts are meant to capture what is percolating on its platform at the moment. Placement is determined by a recent rise in plays, in addition to how often people are sharing a given song.

Tyler was in for more than just a moment of virality. The visibility of his post, combined with the use of real names and specificity, led to his girlfriend’s younger sister discovering the Reddit thread and telling her parents, who were less than pleased. In an update following his original post, Tyler outlined that his relationship had ended and left us with the following statement: “I didn’t force her CBAT, not all can handle CBAT, I know it’s different.”

Maybe we all can learn a thing or two from this saga. When posting something that would qualify as universally embarrassing, consider using a pseudonym. For those interested, Tyler has taken it upon himself to make the entire sex playlist publicly available, and to his credit, there are worse mood-setting tracks on there than “Cbat.” I can’t believe this made the cut.