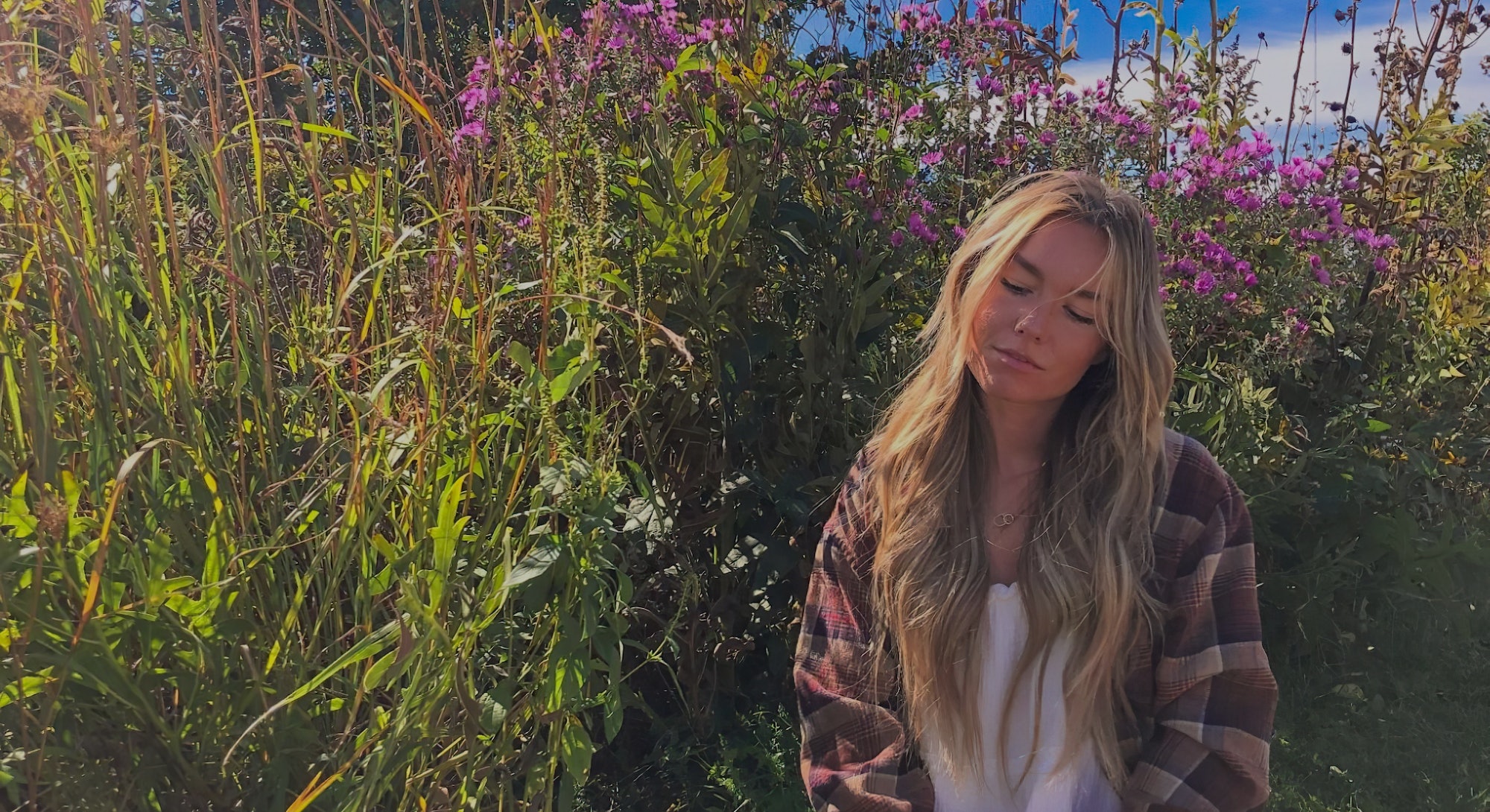 When Victoria Clark first met Jeff, she was smitten.

They started dating in February 2020, after meeting on Tinder. Their first date entailed brunch, followed by rock climbing, and eventually dinner, and lasted 10 hours total. For the first month of their relationship, the pair inhabited their own little magical world. They were infatuated with each other.

When lockdown began, things changed dramatically. The couple had to transition to a long-distance relationship when Jeff moved away to take care of a sick family member, who unfortunately passed away nine months later. Navigating their relationship became increasingly difficult, and eventually the pressure caused them to break up in May of this year.

Clark, who is a flight attendant, had been posting a lot on TikTok throughout the romance. She’d always been open about her emotions online. So, it seemed natural to post about the end of her relationship.

“When we broke up, I was really down in the dumps. One sound in particular caught my eye, and I put together a little video, says Clark, now 23, who is from Alberta, Canada and has more than 24,000 followers on her TikTok account, @missvictoriaclark.

The sound she’s referring to — a woman reading a quote from the novel Reminders of Him (“There was before you and there was during you. For some reason, I never thought there would be an after you”) set over folk rock — has been in more than 10,000 different TikTok videos. Clark’s version features a happy clip of her with Jeff, which then cuts to footage of her crying over their split.

The breakup video has been viewed over two million times. “It just blew up overnight. It was crazy,” she says. “With the comments and stuff, I realized that it was important to share my story. I think being vulnerable has actually helped a lot of people.” In many of her subsequent videos — which have titles like “Sometimes letting go is the only way to heal” and “He gave me back the ring” — she is openly weeping.

Clark is one of several influencers — predominantly white women — who are part of breakup TikTok, a space full of tears, sad music, and “healing journeys.” Content creators in this space spurn the traditionally upbeat or glamorized format of social media, favoring videos that are raw, open, and often heart-wrenching. Their hope is that by sharing their worst moments and documenting their progress as they learn to navigate life alone again, they may help others to recover from their own heartaches.

For Bridgette, a 24-year-old marketing specialist from Ontario, Canada who in June split with her live-in boyfriend after four years, becoming a breakup influencer was unexpected. She’d already been posting openly about her relationship online — she used TikTok as a diary more than anything else — so her ex-boyfriend wasn’t surprised or resistant when she asked to film their last few interactions.

“I posted some videos and they blew up. I had less than 300 followers at the time,” says Bridgette, who now has 23,000 followers on her account, @lifeofb16. (Bridgette asked Input to withhold her last name for her privacy.) “I didn’t expect it to go viral — it felt pretty crazy.”

Bridgette’s breakup TikToks include footage of her and her ex deciding to split, clips of her packing up her things from their shared apartment interspersed with footage from happier times, and even a recording of their final farewell. The last video — which is accompanied by an emotional speech from The Office about goodbyes delivered by actor Steve Carell, set over slow piano music — has been viewed more than 11 million times.

“People were leaving really negative comments. They said, ‘Our generation is so messed up, why would you film it?’ and ‘You really have no boundaries,’” says Bridgette, who is now using her TikTok to document her post-breakup progress. “I really was just doing it for me because posting was already normal,” she says. “But I had to put filters on the comments to get rid of all the negative stuff.”

Despite the haters, this content can be a lifeline for some viewers. “People kept DMing me and asking me for help. I decided to bring everyone together, and now I have close to 340 people in 11 active group chats on Instagram,” says Clark. Most of the chat participants are women ages 18 to 30.

“It’s amazing because I don’t need to constantly be messaging all these people. They’re messaging each other with advice and support,” says Clark, who adds that she’s been thrilled to watch the first few chats she started fizzle out as their members get over their respective exes. “It’s been a really great experience to see everyone grow. I’m glad that I could foster that.”

Kayla McCullough, a 26-year-old Wisconsin-based content creator with more than 200,000 followers on her TikTok account, @kayla.mccul, also feels that her videos are helping people to heal. “I get a lot of DMs every day from people just saying ‘Thank you’ or asking me for advice,” she says. “I feel like a lot of people need to know that they’re not alone.”

McCullough, who tells Input she is currently in a healthy relationship but takes inspiration from previous romances gone wrong, recites self-written speeches about heartbreak from her car, often accompanied by melancholy piano music. Many of her clips have been viewed millions of times.

The comment sections of the videos are littered with professions of heartbreak from her followers, who often request that she turns her monologues into TikTok sounds. Hundreds have used these sounds to soundtrack their own breakup videos.

“Stories are meant to be shared,” McCullough says. “I feel like my stories can help people with their own stories — and that’s all I’ve ever wanted to do.”

But how do the exes feel about all this?

“I showed my ex the video before posting, and he was very, very supportive,” Bridgette says. “I think he just kind of classified it as how I needed to heal from this breakup. At the time, we didn't expect it to go viral.”

Although her ex watched her videos after they first broke up, eventually, it became too much. “He watched up until two weeks ago,” Bridgette says. “We just figured it might be better for us to go ‘no contact’ and move on separately.”

Clark, meanwhile, did not ask for her ex’s permission to post videos of them together, although she did her best to use footage and pictures where he wasn’t easily identifiable. She had to come clean to him when her videos began to pull in hundreds of thousands of views.

Although it was hard, it helped to clear up some miscommunications. “In one of my videos, I used a sound that said, ‘I thought you were the one, until I realized you didn’t want me to be the one.’ When he saw that, he said, ‘You are the one for me. I’m so sorry I ever made you feel like you weren’t,’” she recounts.

Clark says her ex was upset by some of the videos in which she was crying. “He wished that I didn’t use our breakup as content, but he totally understands why — he just asked that I consult him next time,” she says. From there on, the former partners set some firm boundaries. “We also decided he wouldn’t watch the videos where I’m explaining the depths of my pain,” Clarks says, “because we've already talked about that, and I don’t think it would be beneficial.”

“I’m posting for me — it wouldn’t be authentic if I started promoting brands.”

The breakup influencers Input spoke to say that their videos are primarily about healing and growth, not about achieving clout or fame. “When I watch content about breakups, I’m so grateful that someone is willing to share such raw experiences,” Bridgette says. “I think it’s nice to look past the highlight reel we usually post on social media. Heartbreak is genuinely experienced by everyone on this planet — why is no one talking about it?”

Bridgette says she doesn’t care that she’s been unable to monetize her online presence. “I don’t have any interest in doing that. I’m posting for me — it wouldn’t be authentic if I started promoting brands,” she says. “It’d be unfair to the community.”

McCollough also views her presence on breakup TikTok as a calling, rather than a money-making opportunity — especially since heartbreak is transient and viewers are hard to hold on to. “When followers leave my page after the things that they're going through subside, I think it’s a good thing. They’re no longer in a state of pain,” she says. “But I feel as though there’s always going to be somebody who’s in need of help.”

The fact that people will always need help through heartbreak has inspired Clark to keep posting about her own experiences, and leave up her old, teary videos — even though she and Jeff have recently gotten back together. “I am going to leave them up because those videos might be empowering for someone in a different situation,” explains Clark, who has now started posting about her recoupling process.

She’s still grateful she found her way to breakup TikTok, even though she also didn’t profit from it financially. “The biggest benefit of this whole breakup thing is having that community. That’s always been my focus,” Clark says. “I think the connection is worth more than whatever money I could make from it.”