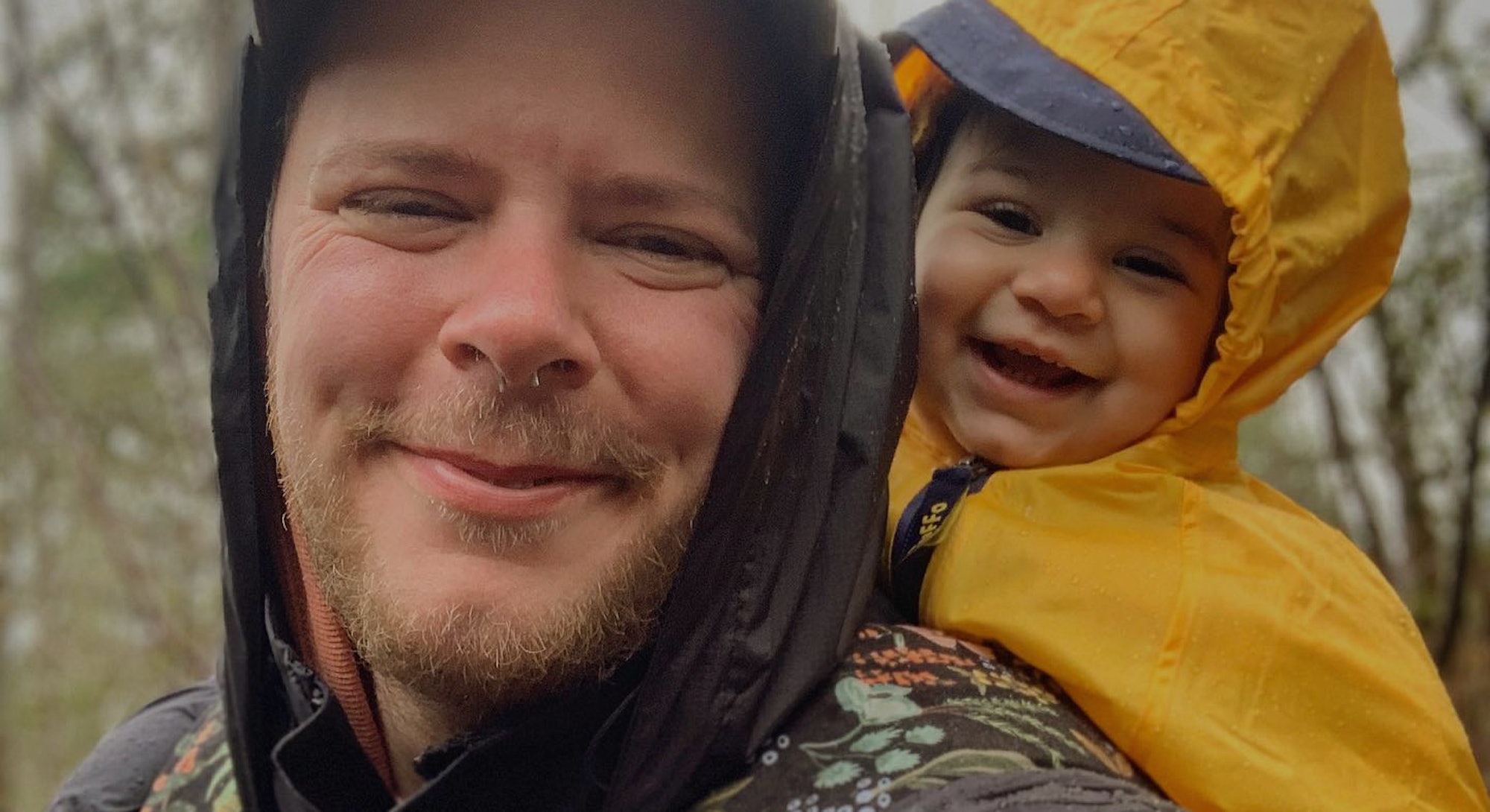 When Penn Griffey decided to stop using testosterone in 2021, it was because he was happy with the way he looked.

He had been taking the hormone for around eight years. His voice had deepened, his muscles had firmed up, and he’d grown a beard. His periods didn’t come regularly — they never had, even before his transition — and they were light, so they didn’t cause him any dysphoria.

“I had this masculine look that I’m fine with, and I just got comfortable with myself physically,” says Griffey, now 28. A fitness life coach and actor, he lives in New York State with his wife, who is also trans. “I didn’t feel like [discontinuing] testosterone would change anything.”

Due to his history with irregular periods and the eight years he’d spent on the hormone, Griffey didn’t worry too much about contraception. The thought of being a biological parent as a trans man wasn’t something he’d really considered. But the act of going off testosterone — which a study has shown can make trans men more fertile — apparently changed everything.

When Griffey found out he was three months pregnant, he was completely shocked. He and his wife were thrilled, but the road ahead looked tough. There weren’t many resources out there regarding trans pregnancies. “It was very hard, because during my pregnancy I had a lot of gender dysphoria, and the clinics were women-orientated,” he says. “It was a lot that I dealt with mentally. I struggled with my gender identity.”

Frustrated by his lack of options, he turned to TikTok to share his personal experiences. “I just wanted to help inspire other transmasculine folks,” says Griffey, who now has more than 21,000 followers on his account, @penngriffey93. His son, Zackary, was born by vaginal birth in December.

Griffey is one of several trans men and nonbinary influencers using TikTok to share their experiences of pregnancy and fatherhood. In the process, these people — who often face hurdles unique to trans parents, such as gender dysphoria and social stigma — are building a network for gender nonconforming parents around the world. They hope to desensationalize trans parenthood and establish a broader definition of what it means to be a dad.

For Danny Wakefield, a nonbinary single parent who presents more masculine, joining TikTok was initially a way out of hardship. Wakefield had struggled with a crystal meth addiction through their early twenties and became pregnant during a relapse. Although they got sober as soon as they found out they were pregnant, they struggled financially. A family member suggested Wakefield’s story could lead to a career in content creation, so they gave it a shot.

“Sure enough, I posted one video, and that night it went viral,” says Wakefield, who is 35 and lives in Washington State with their 17-month-old toddler, Wilder. Their first video — a slideshow of a bearded Wakefield showing off their pregnant belly — has since been viewed almost 10 million times. “It’s been a rollercoaster ride ever since,” Wakefield says. Their account, @dannythetransdad, now has 684,000 followers.

Wakefield is now a full-time content creator, but says that they are motivated more by a desire to help others than to make money these days. “I want people to see a happy trans person living their life with their beautiful family,” says Wakefield. They post content about life with Wilder, plus their struggles with postpartum depression and addiction recovery. “My target audience are the trans kids and people who have very little hope in life,” Wakefield says. “I want them to see it does get better.”

It’s a sentiment shared by Aydian Dowling, a 34-year-old transgender man and activist with nearly 50,000 TikTok followers on his account, @aydiandowling. “When I first came out as trans, I immediately thought I wouldn’t be able to have children. My dream of a family got crushed because I didn’t see anyone like me having kids,” says Dowling.

Today, Dowling lives in Florida with his wife, Jenilee, and their son, Antler, who was conceived using a sperm donor. Jenilee gave birth to Antler in 2018, a few months after Aydian had a hysterectomy. “There’s a lot of youth on TikTok,” Dowling says. “I’m showing them that if they’re trans and they want to have a kid and a family, there’s no reason you can’t.”

Dowling is also eager to change society’s views on fathering a child that is not biologically yours. “It's important to see dads like me, too. We are also still fathers, and we fight that kind of biological stigma,” he says. “What should really matter is what kind of father I am, rather than how I identify or how I was born.”

Although these TikTokers are thrilled with the largely positive response they’ve had online, they also have their share of haters, who come after them for being trans and nonbinary parents.

“A bunch of my videos have gone viral and that offends a lot of transphobic people. They can say hurtful things — people told me my baby should die when I was pregnant,” says Wakefield. Their frequent and open videos about postpartum depression even led hateful viewers to report them to Child Protective Services.

“I wouldn’t experience any of this scrutiny if I identified as a woman,” Wakefield says. “I would be rejoiced, and people would be congratulating me. That’s how society reacts to pregnant women.”

Although they struggle to deal with the hate, Wakefield strives to be sympathetic to their detractors. “Sick people hurt other people,” they say. “If I think about somebody being sick versus somebody being hateful and harmful, it shifts the perspective a little bit. That’s one of the ways that I protect myself.”

Wakefield also takes social media breaks to protect their mental health. “Sharing Wilder’s story and development is a privilege that people have to earn the right to experience,” they say. “And if I’m experiencing a whole lot of transphobia and hatred from social media, I’m going to take space and create boundaries.”

Over the years, Dowling — who started documenting his transition on YouTube in 2009 — has learned to ignore the haters. “I just delete that shit. I’m not here to argue about whether or not I’m a man or if I deserve to be a father — those are things I already know are true,” he says.

The real struggle for Dowling is coping with IRL hate. “I have a lot of passing privilege. I’m white. I look like I’m part of a cisgender straight couple when I’m with my family,” he explains. But things can take a turn when he lets other parents know he’s trans. “You hit it off with another dad and you think everything’s going to be cool, and then they don’t call you and they’re no longer available for a playdate,” he says. “It sucks.”

Wakefield believes that TikTok is an important tool to battle such prejudice. “There’s a lot of us, and that’s what I want the world to know as a visible person. What I’m doing isn’t heroic or courageous or new. There are a lot of trans and nonbinary parents out there who’ve come before me and will come after me,” they say.

“I hope people seeing me as a person and putting a face to that experience helps,” they continue. “It’s important not only for the medical system and providers, but for other people. For society to know that it’s not just women who give birth or have kids.”

Griffey is also motivated by the impact his TikTok could have on others. “A lot of people have said I’ve inspired them to have their own child — transmasculine people, and even masculine-presenting lesbians, because there’s so much stigma when a masculine person goes through a pregnancy,” he says. “Some people label masculinity as male. I feel like people need to understand you don’t have to sleep with a man to have a child.”

He hopes the way he leads his life will continue to inspire other gender nonconforming people not only to start their own families, but to simply live their lives with pride. “Before I had my son, because of the way I presented, I lived a very stealth lifestyle,” Griffey says. “Now, he’s given me the courage to live out loud. To not conform to society. To live in my truth.”