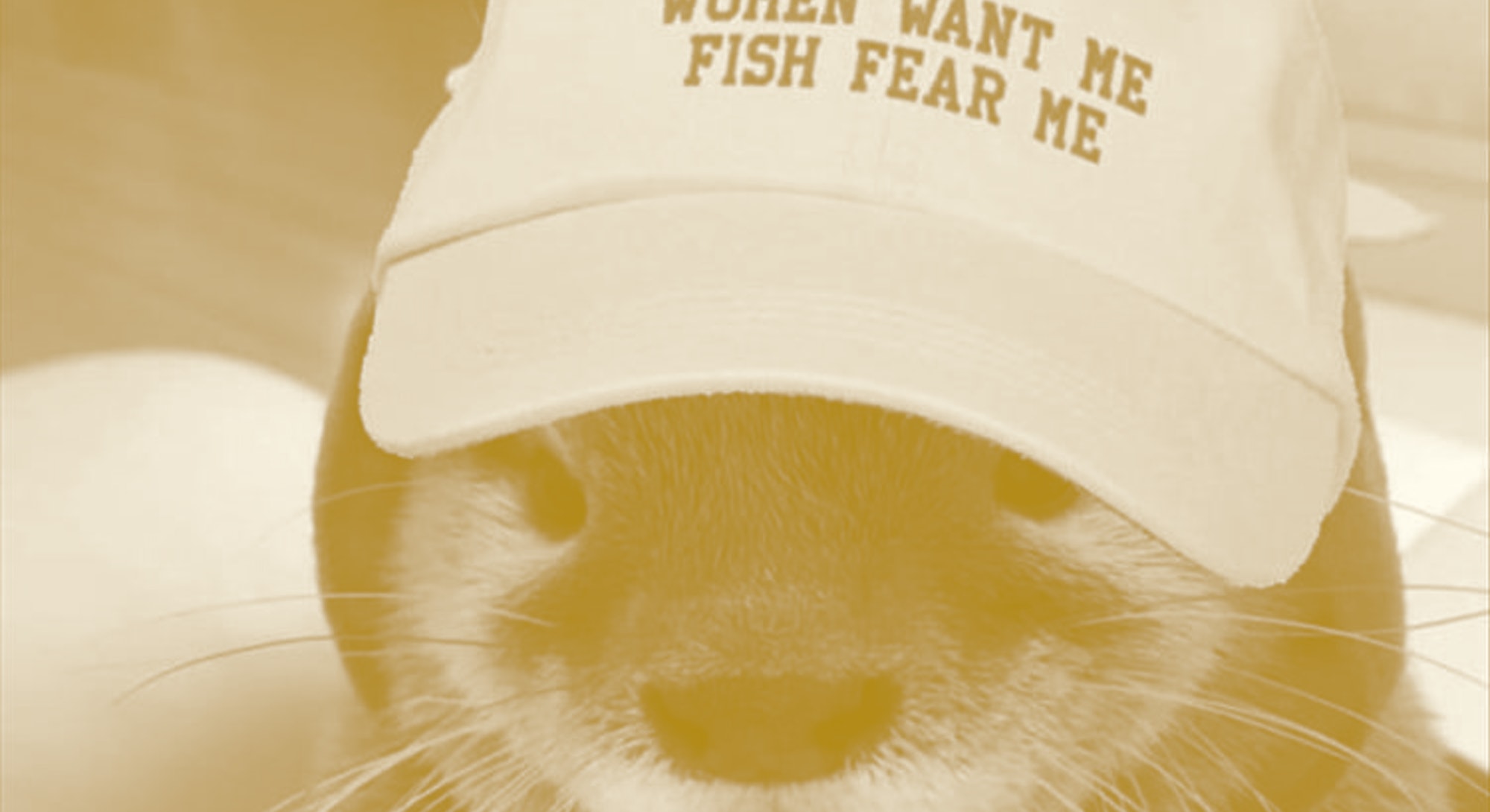 It’s hard to pinpoint the origins of the “Women Want Me. Fish Fear Me” mantra, and it’s even harder to identify the exact time when it was co-opted by young people — particularly young queer people.

In its early days, the phrase graced T-shirts and the backs of pickup trucks along with other goofy fishing mottos, from the chaste, “Good things come to those who bait” to the cheeky, “Of course I come fast, I got fish to catch!” Documented spottings saw it pop up at a 2002 Alan Jackson concert and in a 2009 column in The Daily Oklahoman, in which writer Jackie Papandrew shared that her father “will probably want to be buried in” his “Women Want Me. Fish Fear Me” shirt.

Throughout the late 2010s, right as the Bass Pro Shops hat became ubiquitous, the fishing motto seeped into the mainstream. But Google searches for “fish fear me” really started picking up in June of 2020. Anika Padin, a student at Northeastern University and a fan of the hat, once thought it was an inside joke that spawned from a mainstream show like The Office. The birth of “fish fear me,” though, is far more elusive. Perhaps, in some Jungian twist, it’s always been inside of us.

Know Your Meme, an indispensable chronicle of internet culture, credits the “Women Want Me, Fish Fear Me” hat parodies to a Photoshopped meme of a baseball cap emblazoned with the following copypasta: “Women want me, fish fear me / Men turn their eyes away from me as I walk / No beast dare makes a sound in my presence / I am alone on this barren Earth.” One cap is comically tall (perhaps to fit the wearer’s massive brain); another (from Cool Shirtz for $40) has an exagerrated bill. These days, the slogan graces pixels and textiles alike — often paired with grandpa sweaters, cargo, and New Balance 990s.

Lesbians, in particular, have embraced the phrase. Queer indie musician Lucy Dacus even released a $30 official merch hat that reads “Lucy loves me, dads fear me” and features an embroidered rainbow trout.

“I relate to dads. I’d make a great dad, especially when it comes to stereotypical things like grilling, building things, having a dad sense of humor,” said 21-year-old student Lillian Pearce, who owns and frequently wears one of said Lucy Dacus hats. “It’s not that queer people love fishing, it’s just that co-opting the dad-like phrase is really funny,” she says, before her friend, Mik Dietz, adds that “it’s about playfully making fun of that sort of hypermasculinity.” When people recognize the hat, Lillian says she feels a sense of camaraderie.

The fishing hat evokes a Platonic Dad: some aloof and unflappable patriarch who’s more interested in function than fashion; who takes pride in mowing the lawn; who eats the end of the bread loaf; who won’t part with his ancient pair of grass-stained jean shorts and thinks fishing is the greatest thing in the known world. He’s uncomplicated. He’s macho. He’s irresistible.

The semi-ironic embrace of fishing lore — Big Mouth Billy Bass wall pieces, jaunty catchphrases, and a broader trend of fishingcore — is flirting with mainstream appeal. And it’s not just bucket hats: it’s thick cargos and rubber boots and sea shanties and corny laddish mantras on tattered T-shirts. Young people are embracing the dadcore tenets of being comfy and enjoying a light beer at the lake, even though they’re fishing at lower rates than previous generations (a stat that prompted concerned Kansas lawmakers to hilariously suggest Wi-Fi in parks).

The wry motto has been splintering into variations, having a Cambrian explosion of its own: “Mermaids have mixed feelings about me” and “Fish love me, Women fear me because I fuck the fish” and “me want fish women.” There are fishingcore products for DB Cooper lovers or Animal Crossing. Let any fish who meets my gaze learn the true meaning of fear for I am the harbinger of death,” begins one variation. Back in 2009, a column from the Port Charlotte Sun noted a reverse statement, “Fish fear me, women revere me,” observed on the back of cars, and since then, the variations have become endless. The fish are rapidly evolving and descending into deranged gibberish. Watch out, “the fish and I have entered an uneasy alliance against women.”

One day last summer, I ordered a black baseball hat emblazoned with “‘Women love fish, me fear me” that I saw on Instagram. Of course, I don’t particularly love fish nor do I fear myself enough to get a hat about it, I just fell victim to the temptation of semi-ironic meme clothes.

Within just a few days, Photoshopped meme-y concept art can become a bona fide clothing item on your doorstep — a meme you see on Monday can be in your closet by the end of the week. The path from internet joke to a tangible product is lightning fast compared to the dot-com days when running a virtual shop required computer servers, programming prowess, and a commitment to logistics. Today, around 1.7 million people run shops on Shopify. Other low-code sites like Redbubble handle the dropshipping logistics once you upload the image you want to slap on a product.

Gabe Hockett, a 15-year-old high school student from Minnesota, bought a super tall hat because he likes when things get mangled until they don’t make sense anymore. “Fishing hats are so absurd but they perfectly fit modern humor,” he says.

John Manheimer, who runs various ultrapopular social media accounts about graphic T-shirts, thinks that much of the fishing humor fits into a “whole genre of ironic memed things that are super based, super fried memes.”

“We’re all kinda feral after more than a decade of social media,” he says, “so we start saying things like ‘women love fish, me fear me,’ you know?’”