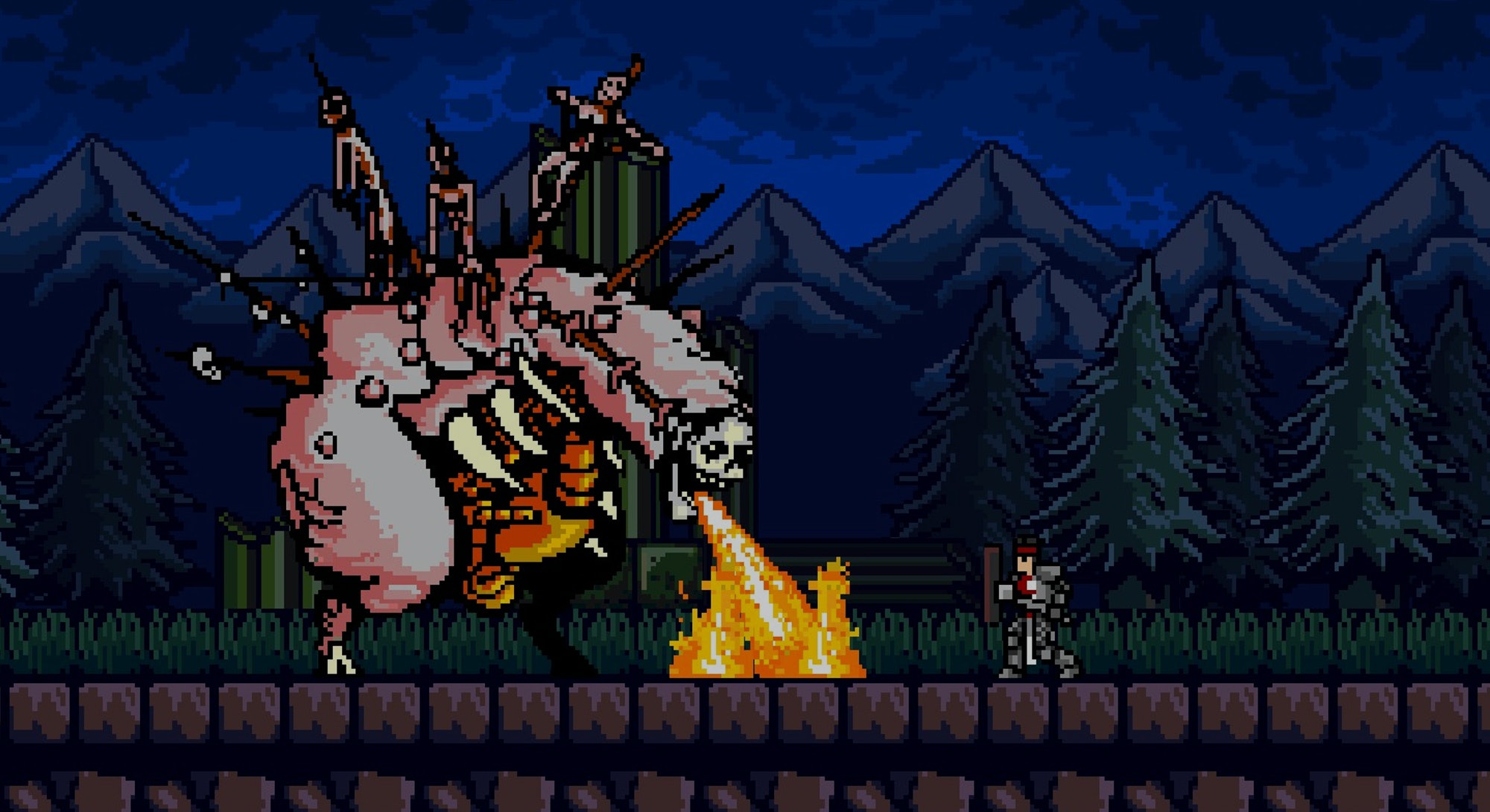 There's a cliffside in the recent indie metroidvania Infernax that doesn't seem to serve any purpose — all it does is block your trusty knight's path forward.

But if you crouch there for five seconds, a tornado arrives, picking you up and ripping out your bones and guts in a stunning display of ghastly 8-bit gore.

For the uninitiated, the sudden death tornado is just an offbeat joke, but for those who’ve played Castlevania 2: Simon's Quest the gruesome sequence is what it’s meant to be — an homage to one of that game’s most infamously cryptic puzzles.

Infernax makes no effort to hide the fact that it's strongly influenced by the proto-metroidvania Simon's Quest, and it's far from the first indie game to take inspiration from a retro classic. There's one big difference in this case, however — Castlevania 2 isn't actually a classic, it’s an ancient text with plenty of room for improvement. That’s exactly what makes Infernax so interesting.

While I'm not going to re-litigate all of the charges against Simon's Quest here — though it may be a good subject for a future column — it's generally considered to be one of the most disappointing games for the NES. (If you're a true gaming scholar, you might know that it was the subject of the Angry Video Game Nerd's first video, and he tears it apart.)

Like its fellow maligned franchise sequel Zelda 2: Adventure of Link, it's an experimental follow-up to an era-defining game that abandons much of what made the first one so memorable to begin with. Add in poorly-translated (or downright misleading) puzzle hints and a lack of basic features like a map, and you can understand why Konami decided to go back to the linear style of the original for Castlevania 3: Dracula's Curse.

Like Simon's Quest, Infernax is a small-scale metroidvania where you take the role of a virtuous knight who must demolish a series of well-hidden dungeons in order to face the Big Bad. In between clearing these castles, you can solve problems for local villagers and clear out mobs of monsters in order to collect gold and XP, which you use to buy better gear and level up respectively.

Though it has a few modern flourishes — particularly its impressive pixel art, which features some of the most strikingly disgusting images you'll see in a video game this year — Infernax is a deeply old-school experience, for better and worse. Like classic Castlevania, your jump is delightfully stiff and unforgiving, and pit hazards usually kill in a single hit. There's no fast travel for most of the game, either: once you use that health potion, you'll have to stomp back to the village to get a new one or reload your save, so don't waste it.

The game has its punishing stretches, but Infernax isn't particularly difficult, especially by actual 8-bit standards. You can purchase permanent "extra lives" that are replenished every time you save, and healing magic can pull you out of tough jams. However, checkpoints are fairly infrequent on the intended "classic" difficulty, so if you're tired of running back after falling into a pit trap, the "casual" setting is a lot more forgiving.

By addressing the flaws of a not very classic "classic," Infernax manages to stand out in the crowded metroidvania space.

Perhaps the strangest aspect of Infernax is its morality system. During sidequests, the hapless townsfolk will often give you an option of how to proceed: will you tell the ruffians to leave the wizard alone, or choose to carouse with them instead?

While these sequences can make for entertaining consequences, the choice usually boils down to saving the orphan or killing the puppy, so to speak — they're not actually interesting moral quandaries, you just pick one path from the start and stick with it. It is nice that a game about literal demons actually gives you the option to be evil, though.

That said, the game actually locked me out of the "ultimate good" ending because Infernax and I disagreed on what exactly qualifies as a "good" choice at one crucial juncture, which was more annoying than endearing in this case. (Hot tip: when you run into a man transforming into a monster who says "kill me," don't kill him. That's apparently what bad people do.)

By so dutifully patterning itself after a divisive 8-bit title, you might argue that Infernax limits its potential audience to only die-hard old-school gamers. While most of us aren't interested in Simon's Quest, Infernax manages to fix the obvious flaws of its inspiration to such an extent that it can appeal to almost anyone who appreciates a stiff challenge.

At this point, almost every classic game can boast a well-regarded modern indie counterpart, from Super Metroid (Axiom Verge, many others) to Castlevania 3 (Bloodstained: Curse of the Moon). By addressing the flaws of a not very classic "classic," Infernax manages to stand out in the crowded metroidvania space. You don't find this kind of small map excellence very often, so if you're in the market for a truly well-crafted, old-school game, don't look any further.

An 8-bit side-scroller that pays homage to 'Castlevania 2: Simon's Quest.'