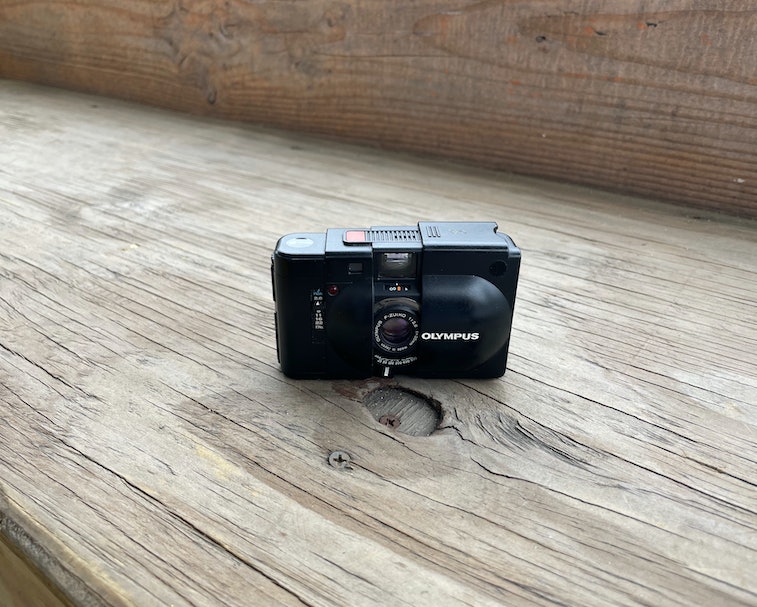 I’ve wanted to learn more about film photography for a while now, but the convenience of my iPhone camera has always held me back. It’s always right there in my pocket — and what film camera could possibly be just as easy to carry around with me?

Until recently, my film camera experience has been limited to chunky hand-me-down SLRs and a Fujifilm Instax Wide that’s far heavier than it’s worth. This, I thought, was the trade-off: You can take lush, gorgeous photos, but only if you’re willing to cart around a bulky piece of hardware to do so. Anything else would be expensive (the Contax T2 can go for upwards of $1,000 on eBay) or would provide little camera control.

Then I found the Olympus XA. (Many thanks to the camera geeks of Reddit for the recommendation.) It’s a 35mm rangefinder with a great lens — and it fits in my pocket, too.

The hardware — The XA, which Olympus first released in 1979, is actually the first in a series of film cameras; the XA1, XA2, XA3, and XA4 all followed in the original’s footsteps with slight but meaningful tweaks. We’re talking about the XA here (not the XA1... confusing, I know), the series’ first release and the only true rangefinder in the series.

Each camera in the XA series uses this neat hardware construction that’s partially responsible for its extremely low footprint. When not in use, the lens is protected by a convex sliding dust cover, relieving the camera of a lens cap and therefore keeping its form factor squatty.

I wasn’t sure how I’d feel about this sliding cover when I first came across photos of the camera itself. It’s pretty weird-looking. In practice, though, it’s a joy to use, and a great conversation starter, too.

What really drew me to the original XA over its siblings is the degree of control it offers for the photographer. The XA includes an aperture control lever on the front-right side of the body, whereas subsequent models replaced this control with a few automatic settings.

The XA doesn’t have a built-in flash — again, a godsend for its form factor — but the optional A11 flash is very easy to connect and disconnect depending upon your lighting needs. It adds only to the XA’s width when connected, too.

The learning curve — I am a novice when it comes to operating manual cameras. I’ve watched a few YouTube videos on how aperture, film speed, and shutter speed interact, but I am new to the scene. So I wanted a camera I could use for both practice and fun.

The XA strikes a sweet balance between the two. Focusing with the rangefinder is perhaps the steepest part of the learning curve, if you, like me, have never used one before. As far as rangefinders go, though, this one is pretty forgiving and the distance markings on the focus dial are quite helpful for zone focusing. The same goes for the aperture control; its location makes it easy to adjust while watching how the built-in light meter changes the shutter speed to match.

Focusing with the rangefinder is perhaps the steepest part of the learning curve.

The community — The Olympus XA has a significant support system in the form of an active online community. Places like Reddit’s r/analog and r/AnalogCommunity are filled with people not only familiar with the XA but passionate about helping others learn about using it. That’s unusual, for a decades-old device.

Here’s a quick example: When I first received my XA, I had no idea how to load its film or batteries. A quick Reddit search was all it took to get the camera up and running. (I’d purchased an older Minolta before this one and couldn’t even find enough info on it to figure out which batteries to buy.)

Because this is an older camera, you’ll want to check out eBay and other resale sites to scoop one up. Make sure you check the description to ensure everything’s in working order. Prices can range anywhere from $75 to $150 depending on the device’s quality.