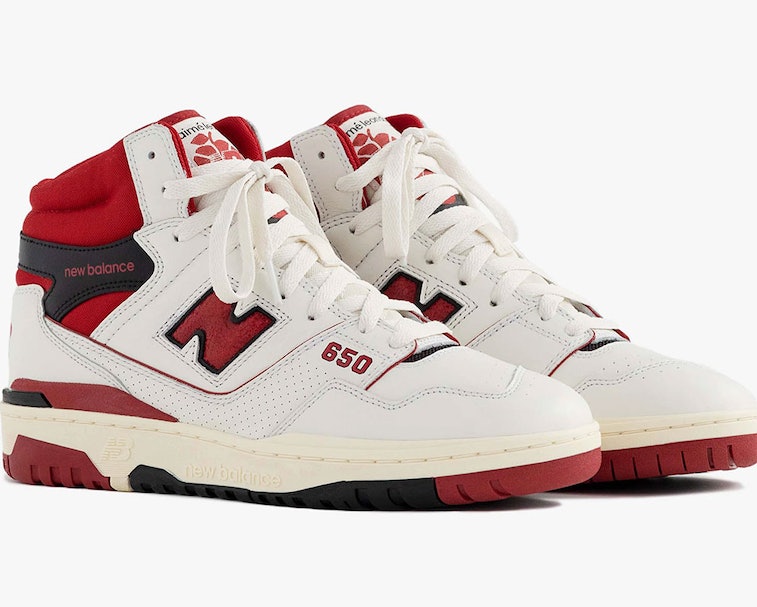 Aimé Leon Dore and New Balance are both scorching hot, and their latest tasteful sneaker is about to cause all sorts of commotion.

The New York City menswear brand has opened up its raffle for the 650R sneaker, a high-top take on New Balance’s wildly popular retro basketball shoe. ALD has been essential to the 550’s chokehold on sneaker culture as it kicked off the silhouette’s revival with a collaboration in 2020. Their higher-cut 650R followed in summer 2022, and now the two brands are bringing it back with an additional fourth color scheme.

Off-white leather and creamy, faux-aged midsoles take up the majority of each of the four variants. What separates each are the accents — including logos, outsole, and ankle support — which are available in either navy, red, silver or green. All four sneakers are tasteful with slight hits of color and a vintage aesthetic, a signature for each of ALD’s New Balance sneakers to date.

New Balance’s best weapon — New Balance first linked up with Aimé Leon Dore back in spring 2019, and in the years since both have seen serious spikes in popularity. Just a year later, New Balance already had momentum on its side with other key collaborators including Casablanca and Joe Freshgoods — but few would have predicted just how much attention the brand born 116 years ago in Boston now commands. As far as the zeitgeist goes, the only sneaker brand ahead of New Balance right now is Nike.

Prior to reviving the 550 together, ALD and New Balance had released three other sneakers, the 827 Abzorb, 990v5, and 997. The retro basketball sneaker took off like none of its predecessors, however, and non-collaborative releases for the 550 are almost as hard to get as the Nike Dunk. Pairs from the original drop now sell for three times more than their original price on platforms such as StockX — and although the 650R isn’t quite as hyped, it’s still a seriously great sneaker.

All four color variants for the Aimé Leon Dore x New Balance are now up for raffle through the former’s website. The draw closes at 11:59 p.m. EST tonight, and those lucky enough to win will complete their purchase for $165. TikTok and Instagram have already been rife with 550s and 650Rs, and you can expect to see even more quite soon.