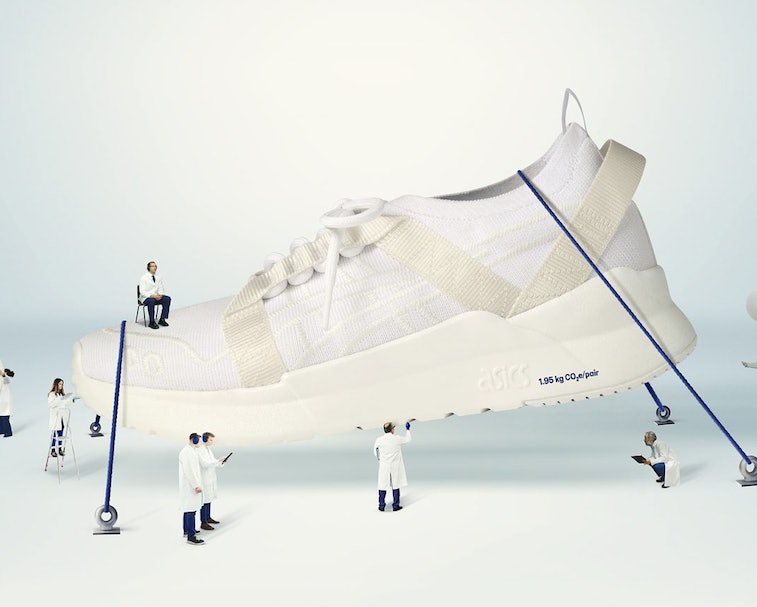 All the biggest shoe dogs are competing to see who can make the sneaker with the least environmental impact. Adidas and Allbirds are reigning champions with their joint Futurecraft.Footprint, which only emits 2.94kg of CO2e per pair. Asics, however, has just taken the title with the Gel-Lyte III CM 1.95, a shoe with the lowest carbon footprint ever achieved in a commercial sneaker.

The Gel-Lyte III CM 1.95 has been in the works for more than a decade. Researchers and developers at the Massachusetts Institute of Technology partnered with Asics designers to create the blueprint. The midsole and sockliner use a carbon-negative foam, made in part from Septon Bio-series, a bio-based sugarcane polymer. Aligning with Asics’s goal of sourcing 100 percent of its polyester from recycled sources by 2030, the upper and mesh come from recycled and solution-dyed polyester.

Bands of tape wrap around the upper to provide a more sound structure as you walk or run. With almost 1 kg less CO2e emissions than the Futurecraft.Footprint, the sustainable Gel-Lyte III “marks a blueprint that can be iterated across all of our future products,” the brand said in its campaign video.

A for effort, Asics — Over the course of more than ten years, the Asics and MIT teams made hundreds of micro and macro changes to four major phases of the product: materials and manufacturing, transportation, use, and end-of-life. Throughout the manufacturing phase, the brand was able to utilize 100 percent renewable energy, further reducing its burden on the planet.

The idea behind the shoe stems from the notion that a sound mind and body are intrinsically linked. But in order for those elements to live in harmony, a sound Earth has to be factored in. Production of the average running shoe emits about 13 kg, or around 30 pounds, of carbon dioxide and takes about 30 to 40 years to decompose. Instead of creating a whole new silhouette, Asics sustainability expert Takao Arai told Sneaker Freaker that the brand chose to just revamp one of its most popular models, the Gel-Lyte III.

Asics plans to release the Gel-Lyte III CM 1.95 to the public late next year on its website. A closer look at the specs and aesthetics is sure to arrive before then, but Asics certainly has our attention now.