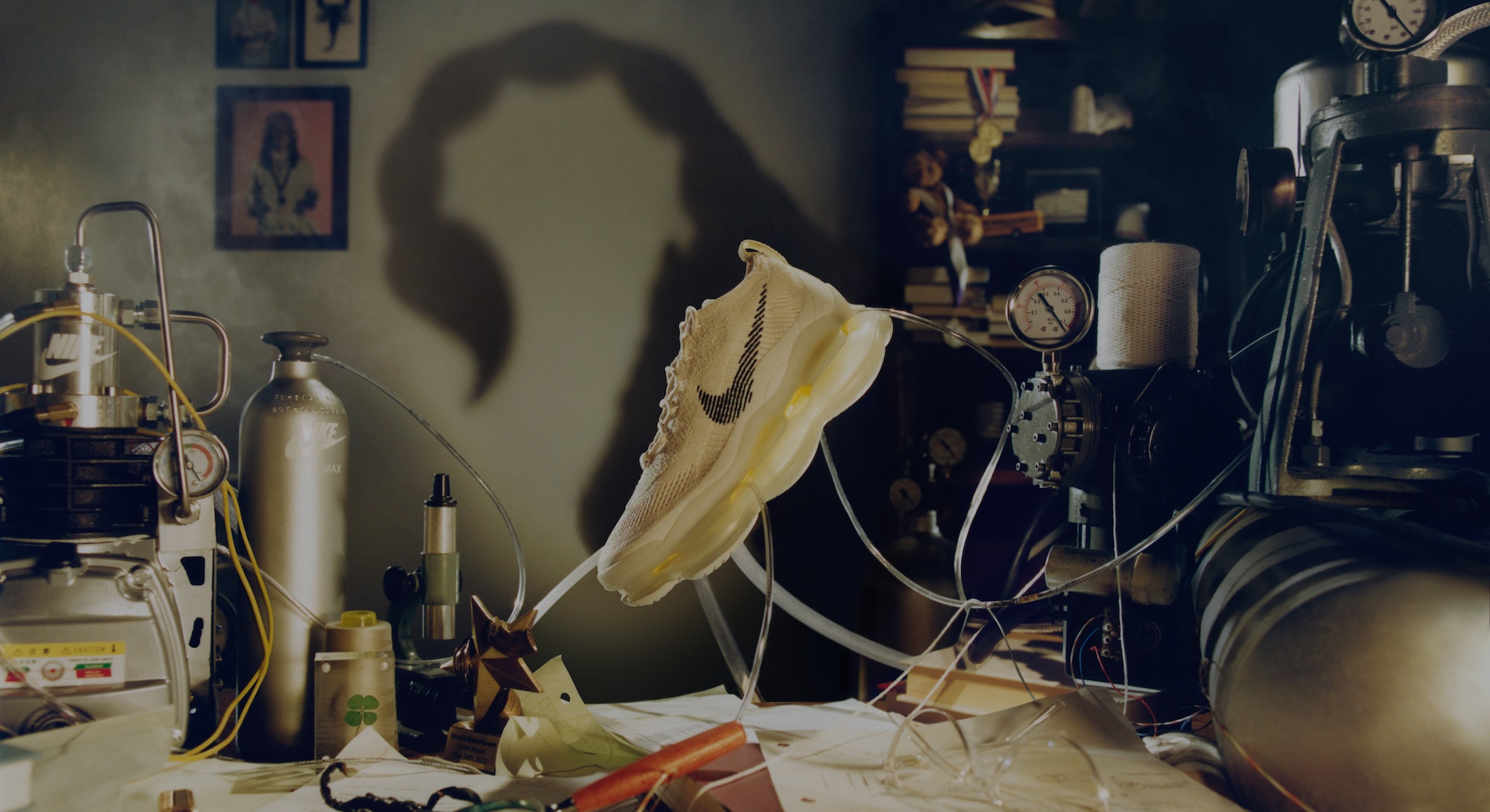 Nike is raring to put a scorpion under your feet, but the last thing it wants is for you to be stung.

Today, the sportswear giant is introducing the Air Max Scorpion, a sneaker with a colossal airbag and an origin story every bit as unusual as its appearance. At first glance, it’s an oddball, but so too were the Vapormax and Air Max 270, two runaway hits for Nike.

The Air Max Scorpion, which will release on October 5 for $250, boasts more Air than any other Nike sneaker in terms of pounds per square inch. The pods that house the namesake cushioning are also the brand’s most complex yet, as the geometric shape replaces what has traditionally been rounded-off tubes. Visible gaps within the midsole reveal strategically placed contact points between the foot and the airbag, which helps to facilitate a smooth transition in each stride.

When viewed in profile, you’ll see the Air Max unit sandwiched by what are essentially two plates. Up top, and directly under your feet, is the TPU plate creating the contact points that make the airbag flex in a variety of dimensions. Down low, closest to the ground, is an outsole that’s been computationally optimized to increase traction. The Air Max Scorpion’s upper may not be the focal point, but for an added sense of tactile pleasure, chenille yarn — used for the very first time in Flyknit — adds plushness to the sock-like fit.

Although not overtly made for performance, the Air Max Scorpion applies the Nike mantra “If you have a body you’re an athlete” to city life. The sneaker was designed to be worn all day and support its wearers in those brief bouts of athleticism to, say, run up the stairs and catch the subway just in time. Nike even simulated such situations in its lab to ensure the sneaker lives up to its urban purpose, as stairs and curbs become the field of play.

“There's some people that tell us they navigate the city and kind of turn it into a playground,” Kathy Gomez, VP of footwear innovation for Nike, tells Input. “They'll find streets that aren't super crowded so they can go faster, or they'll take an extra hill. It's like they think of it as a game or a workout, so that inspires us to solve for ways that make sense for their needs.”

Eighteen months of development went into the Air Max Scorpion, making it the first Nike sneaker to go through its entire design and production cycle during the pandemic. The team working on the shoe did so from home, and timing ended up accelerating the application of technologies that would have been adopted later on otherwise.

Virtual reality allowed designers to sketch in three dimensions, while new simulation software drastically cut down the time needed to test different iterations of the design. A single concept would have required eight weeks to test previously, but for the Air Max Scorpion, Nike was able to test several iterations in just five weeks. With these new tools, Nike didn’t need to produce as many samples as usual, which helped save resources in addition to time. Once the team actually got their hands on a physical mold, it was much closer to the final result than it would have been by using past processes.

“The gestural sketching allows you to have an idea very fast,” says Andy Cain, VP of footwear product design for Nike. “You just drop a few curves, you can surface it, you can look at it in all dimensions, and then you can print it. It unlocks a barrier and puts the designer in a place where they can be quite creative. It's really fun at the same time. I ended up spending way too many hours [in VR] obsessing because you can solve things really early."

Another challenge made easier by the new tech was ensuring that the Air Max units performed the same across different-sized shoes. Typically, Nike would begin by designing a sample size 10, and shrinking or enlarging the sneaker could lead to deviations in performance. Thanks to computational engineering, tweaking the geometry of the Air Max Scorpion became much easier and ensures the same experience across all sizes.

Prior to the pandemic, Nike would generally need 22 to 24 months to produce a new sneaker from start to finish. Not only has the Swoosh cut down the time needed by a quarter, but it’s also figured out how to pack more complicated designs into that truncated window. The Air Max Scorpion is just the starting point for the new technologies that helped create it, and we’ll just have to wait and see what else Nike’s designers cook up with their heads in the clouds of VR.