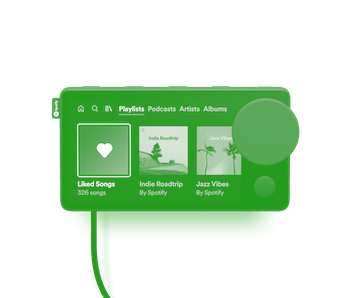 Car Thing, Spotify’s unique and short-lived in-car device, is no more. The streaming service quietly announced it had discontinued its first foray in hardware during its Q2 earnings presentation, noting that the decision “negatively impacted” its reported gross margins.

A short life — It’s a strange end to an experimental product that had an equally strange life. Car Thing is an in-car display with a knob that offer access to quick controls for your Spotify library, allowing you to scroll through your playlists and use voice commands to pull up songs, radio stations, and more.

The odd thing about the device is that it isn’t standalone; you have to connect it to your phone over Bluetooth and then connect your phone to your car. Car Thing is basically a glorified Bluetooth controller for older cars that don’t have built-in displays.

Spotify first rolled out Car Thing in April 2021 on an invite-only basis, before creating a public waitlist for subscribers that October — it finally made the device generally available for purchase in February 2022. Given how hard it’s been to get a Car Thing, how limited its functionality actually is, and how expensive it feels at $89.99, it’s easier to see why things didn’t quite work out.

Why? — But what’s less clear is what Spotify got out of this whole experiment. The company tells TechCrunch that the goal of Car Thing “was to better understand in-car listening, and bring audio to a wider range of users and vehicles” which I guess it was successful at doing. I imagine having a place where users were frequently forced to use Spotify’s hands-free voice controls was useful (from a data perspective) too. But it still feels like a missed opportunity.

The iPod is dead, but I don’t think the desire for dedicated music devices ever fully went away. Spotify, as one of the biggest streaming services in the world, is in a unique position to fill that niche, and maybe even make it popular again.

What if the Car Thing could stream music without the help of a phone, perhaps with built-in speakers so you can take it out of your car if you want? Or what if Spotify bought a company like Mighty, and tried to offer an iPod Shuffle-type device of its own? There are lots of options, it’s really just a matter of spending the money and trying it.

Last dance — Spotify reportedly has other hardware tests in the works that could see the light of day, and the Car Thing remains available for purchase at the discounted price of $49.99. Given how quickly the company decided to pack up shop, I can’t really recommend purchasing one if you’re expecting years of support, but if you want to know what Spotify hardware looks like, it’s there for the taking.