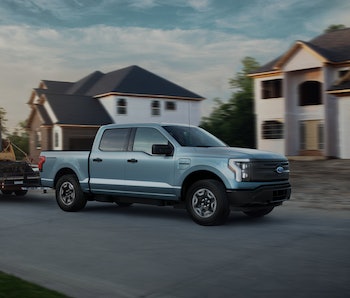 We’ve known for a while now that Ford’s all-electric F-150 pickup has the power to revolutionize the EV market. We now have further confirmation of that fact: an “extended range” version of the F-150 will pack an even larger battery — with a usable capacity of 131 kWh — into the pickup’s body.

Ford revealed the impressive battery specs during a livestreamed event last week, Auto Evolution reports. The Extended Range model will offer approximately 300 miles of range, a significant increase from the 230 miles estimated for the Standard Range battery pack. And those targets are with a payload of up to 1,000 pounds.

Extreme power for the price — The 98 kWh battery pack was already extremely competitive for an electric vehicle. Tesla’s Model Y, one of the most popular EVs available, only packs in a 75 kWh battery; the Mustang Mach-E, one of Ford’s more well-known EVs, tops out at 88 usable kWh.

With an expected retail price of just $42,000 that’s a lot of bang for your buck. The Extended Range battery will certainly add a bit to that price tag, but it’ll also offer one of the most powerful batteries we’ve seen with such a low price.

Now, to be fair, even the Extended Range battery is nowhere near what’s promised from the dual-motor Cybertruck, which supposedly contains a 200 kwH battery within its strange armored shell. But all pricing information has been wiped from the Tesla website, so there’s no way of knowing just how much that enormous battery will cost you. Also, Elon Musk keeps pushing the Cybertruck delivery dates back — so you could be waiting a mighty long time to drive one.

The wait begins — Ford plans to begin shipping the F-150 Lightning some time this spring. Those who haven’t yet preordered one of the pickups will likely have to wait until further into 2022 for theirs to arrive; 200,000 people already pre-ordered the truck, so many that Ford had to halt reservations earlier this month.

As we’ve said before, it really seems like the F-150 Lightning could be the offering that finally convinces the American public to switch to all-electric vehicles. It’s an instantly recognizable and well-trusted pickup. That gives it a leg up over competition like Rivian’s R1T, too.

Stay up to date